Infographic above explains types of good and bad fats. But what about the differences between Omega 3, 6, and 9? All these three fats can be considered as good fat, but there are certain thing which differ it from one another.

Monounsaturated fatty acid (MUFA) or also known as omega 9, is because of the double bond position which is on the ninth position from the omega end. It is a type of fat that is found in vegetable and animal fat such as in canola oil, sunflower oil, olive oil and in nuts. Unlike Polyunsaturated fatty acids (PUFA), Omega 9 is a non essential fat, which means body is able to produce this types of fat. However, there are also benefits when it is obtained from food such as it can reduce risk of cardiovascular disease and stroke, reduce LDL cholesterol (bad cholesterol) and increase HDL cholesterol (good cholesterol) and help to eliminate plague build up in the arteries which can cause heart attack and stroke.

Among types of Omega 3 with extensive scientific research are Eicosapentanoic acid (EPA), docosahexanoic acid (DHA) and alpha lipoic acid (ALA). The difference between these three types of Omega 3 fat is the number of carbon atoms 18, 20, and 22 for ALA, EPA, and DHA respectively. ALA can be converted to EPA and then to DHA, but the conversion which usually occurs in liver is less than 15%, which is why it is recommended to consume EPA and DHA directly from foods or/ and dietary supplement. ALA is present in plant oils, such as flaxseed, soybean and canola oils. DHA and EPA is present in fish, fish oils, and krill oils. But the DHA and EPA in krill oil is not originating from krill but rather from the ingestion of microalgae.

Whilst, among types of Omega 6 are linolenic acid (LA) and Arachidonic acid (AA). The difference between these two are the position of double bond in the omega 6 fatty acid chain. Linolenic acid (LA) is the same like ALA, it is essential fatty acids which cannot be produced by human body. Sources of food with  LA are soybean oil, corn oil, safflower oil, peanut oil, cottonseed oil and rice bran oil. Whilst source of food for AA are peanut oil, meat, eggs, and dairy products.

Omega 3 and Omega 6, are beneficial for cardiovascular diseases where it can help with managing cholesterol level, triglycerides level and blood pressure level. There are also certain supporting data stated that it can help with reducing weight and waist size, improving infant brain development in fetus and fighting inflammation. However, other than for cardiovascular health the finding are rathe inconclusive. But as for Omega 3 and 6 (PUFA)  and heart health American Heart Association (AHA) recommends that 8-10% of calories should come from PUFA as there is evidence eating more PUFA up to 15% of daily calories in place of saturated fat can lower risk of heart disease.

Diagram below shows the comparison between these three types of good fat. 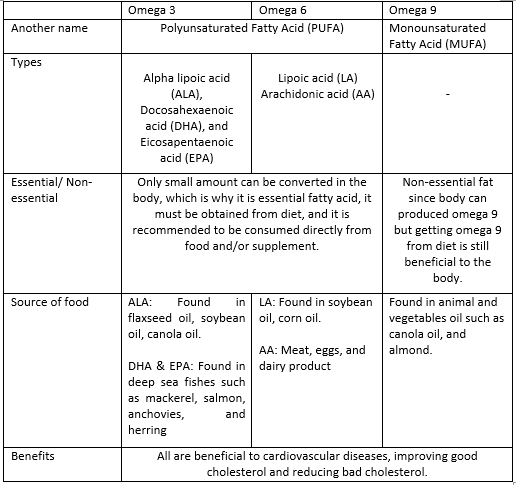 All in all, Omega 3, 6, and 9 are beneficial for the cardiovascular health, as it can help with lowering LDL level (bad cholesterol), increasing HDL level (good cholesterol) and help with blood pressure level. Several other studies also mentioned that certain good fat can help with inflammatory diseases such as joint pain and skin health such as eczema. However, consumption of all these fat must be in balance since overconsumption of these can lead to serious health effect! However, replacing bad fat (or even good fat) with refined carbohydrates food, does not help with your health either. It is so important to note that everything must be in balance, and consuming healthy food is not about one type of food only, it about variety kind of food and the quality of food, and the food source as well!